Physical stability can refer to any number of attributes ranging from appearance to color to viscosity.  Many stability parameters are at least partially, if not completely, a function of suspension stability – the ability of the suspension to remain in its original state. This is critical for pharmaceutical formulations since any change could negatively impact its performance. Suspension stability is the result of various physical and electrochemical forces over which formulators often feel that they have little control. However, an understanding of the fundamental forces involved will, in fact, empower the formulator to create more effective and stable formulations.

The preparation of oil-in-water (o/w) and water-in-oil (w/o) emulsions requires emulsifiers and other tensides1. Similarly, the preparation of suspensions of powders in liquids usually necessitates the use of chemical dispersing aids, including surfactants2. These materials, dispersants and emulsifiers, while they can also provide some degree of stability to the final suspension or emulsion are not true stabilizing aids. It is, therefore, often advantageous to consider stabilization as a separate issue. This is particularly so when a system is to be challenged by extreme process conditions such as freeze/thaw cycling and high temperature/long term storage. Thus, when stability is an issue it is important to consider more closely the mechanics of the stabilization process.

A suspension comprises, in the simplest case, a mixture of two phases. The phases are described by the terms “dispersed phase” (the material forming particles) and the “dispersion medium or vehicle” (the material in which the particles are distributed). The dispersed (internal) phase can be solid particles such as in nail polish, liquid droplets such as in an emulsion, or air/vapor/gas droplets such as in a foam. For this discussion, the term “particle” will be used for the dispersed phase be it solid, liquid, or gaseous. The (external) liquid phase can be aqueous or non-aqueous.  There are examples are all around us, from car polish to salad dressing. The overall properties of the suspension are influenced by the chemical and physical characteristics of both the dispersed phase and the dispersion vehicle and the interactions between these two individual materials when they are mixed together.

The physical condition of the dispersed phase can vary from round, such as oil droplets in emulsions to needle- or plate-like crystals in clays and oxides. A very important physical property that influences the performance of a suspension is the particle size distribution (PSD). The PSD directly affects important characteristics such as the bioavailability of active pharmaceutical ingredients (APIs) and the tone and hue of colored pigments, such as iron oxides used in daily-wear skincare formulations. In addition, the PSD determines settling properties and affects rheological behavior (flow and deformation), as can be clearly demonstrated by varying the droplet size in a given emulsion.

All suspensions, including coarse emulsions, are inherently thermodynamically unstable. They will, through random motion of the particles over time, aggregate because of the natural and dominant tendency to decrease the large specific surface area and excess surface energy. This tendency becomes increasingly important the smaller the initial particle size and is especially significant for colloidal-sized particles (less than 1 micron). Hence attention must be paid to any process of attrition or comminution to reduce particle size because of the potential for creation of a population of submicron particles. The particle size will always tend to increase with time unless some barrier is present to keep them from coalescing or sticking when they get close to each other. This is true for both liquid/liquid and solid/liquid suspensions. This will also result in a change in shape and width of the PSD. This is illustrated in Figure 1 where an emulsion was destabilized by dilution in a solution of an ionic surfactant of opposite charge. The frequency of particle-particle collision depends on PSD, particle concentration, dispersion medium viscosity and temperature. 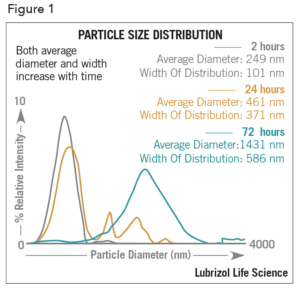 The suspension stability thus refers to the resistance to change in the dispersed state of the system. This is somewhat of a moving target that each formulator must define on a case-by-case basis because it depends upon how long you need the system to remain “stable”. For most commercial, industrial, and pharmaceutical products stability is usually measured in years. However, suspensions used as an intermediate during manufacturing may only need to survive for a few hours or days. It should be noted that the process of particle settling is not necessarily an indication of instability.  Many particulates, especially oxides, have a high density and will simply

settle over time due to gravity. If the particles are not well stabilized, they will eventually aggregate. However, a well-stabilized, but settled, system will re-disperse quite readily with agitation – think of cream in whole milk.

There are two fundamental types of interaction between particles – attraction and repulsion3,4. Whether two approaching particles will combine or not depends on the potential energy barrier between them. This potential energy barrier arises as a consequence of the difference in magnitude of repulsive forces in comparison with attractive electrostatic forces. When the attractive forces are dominant, the particles will adhere; if the repulsive forces are stronger, the particles will remain suspended separately as represented in Figure 2. The forces of attraction (called van der Waals forces) are always present, pulling particles together even in completely nonpolar systems, and acting over surprisingly large distances. The magnitude of the attractive forces increases as the polarity of the medium/vehicle decreases. This is very important in, for example, w/o emulsions where the presence of small amounts of less-polar impurities in the oil-phase can promote flocculation or even coalescence. In order to maintain the highest degree of suspension stability, the forces of attraction must be kept as low as possible and there must be sufficiently repulsive force to counteract them. There are basically two ways to attain this – electrostatically and sterically – as shown schematically in Figure 3. Either method can be used but it can be seen from this simple picture that each will result in completely different rheological (flow and deformation) behavior of the stabilized suspension. The electrostatic method places an ionic charge at the surface of particles that results in mutual repulsion. For maximum stability the electrostatic force of repulsion should be as large as possible, i.e., the particle surface charge should be as large as possible. The force of repulsion becomes smaller as the ionic strength of the medium increases. Thus, the lowest electrolyte concentration possible should be used. This is problematic for many pharmaceutical formulations that tend to be isotonic with blood, i.e., they have a very high ionic strength. Any method of making the particles in the suspension display a net charge will work for electrostatic stabilization and there is much room for creativity. One common process is dissociation of ionogenic surface hydroxyl or carboxyl groups. This process is pH dependent (in water). Oxides and clays can readily be stabilized by this method. A second is through physical adsorption of ionized surfactants and polyelectrolytes. Indeed, physical adsorption is the foundation of particle dispersion technology and has been successfully employed for decades. However, the inherent shortcoming is that any physically adsorbed species can, and often will, be displaced during subsequent processing because of the often severe thermal and mechanical agitation employed.

The sign and magnitude of the surface charge is an important factor not only in the choice of dispersing and processing aids but also when preparing co-suspensions containing different dispersed materials. A reliable and well-established method to determine the surface charge of suspensions is zeta potential5.

The steric method of repulsion produces a mechanical barrier of non-ionic long chain molecules around interacting particles to prevent collision, rather like the bumper on a car. The use of macromolecules to provide steric stabilization is almost as much an art as a science and various conditions must be met if stable dispersions are to be successfully prepared. The dispersion medium or vehicle must be a good solvent for the adsorbed macromolecule to allow for the polymer chains to extend as far as possible into bulk solution. The surface coverage must be complete, and the adsorbed moiety must be firmly attached to the surface but not so strongly that it will be collapsed because the depth, or thickness, of the steric barrier has to be large. Thus, in practice, the most useful steric stabilizers are block and graft copolymers. They are generally composed of two parts; one of which is insoluble in the dispersion medium and which firmly anchors the stabilizing moiety, and a second part which is soluble in the dispersion medium, providing the steric repulsion. Naturally occurring polymers such as gelatin, casein, gum Arabic and even vegetable oils have been used. Sterically stabilized systems are much less sensitive to electrolytes and they provide tolerance at very high ionic strengths. Thus, they are very useful in formulating pharmaceutical suspensions. They exhibit more progressive rheological properties and generally display better freeze/thaw behavior. Sterics also allow higher solids loadings and they work in non-aqueous media. The disadvantage is that a suspension can be readily destabilized if there is poor coverage or if there is excess steric stabilizer in solution. An entire textbook has been devoted to this subject7.